Over the last ten years, TVASurg has produced dozens of surgical procedure videos and filmed dozens more. For this month’s blog, we’d like to talk about our surgical filming methods. 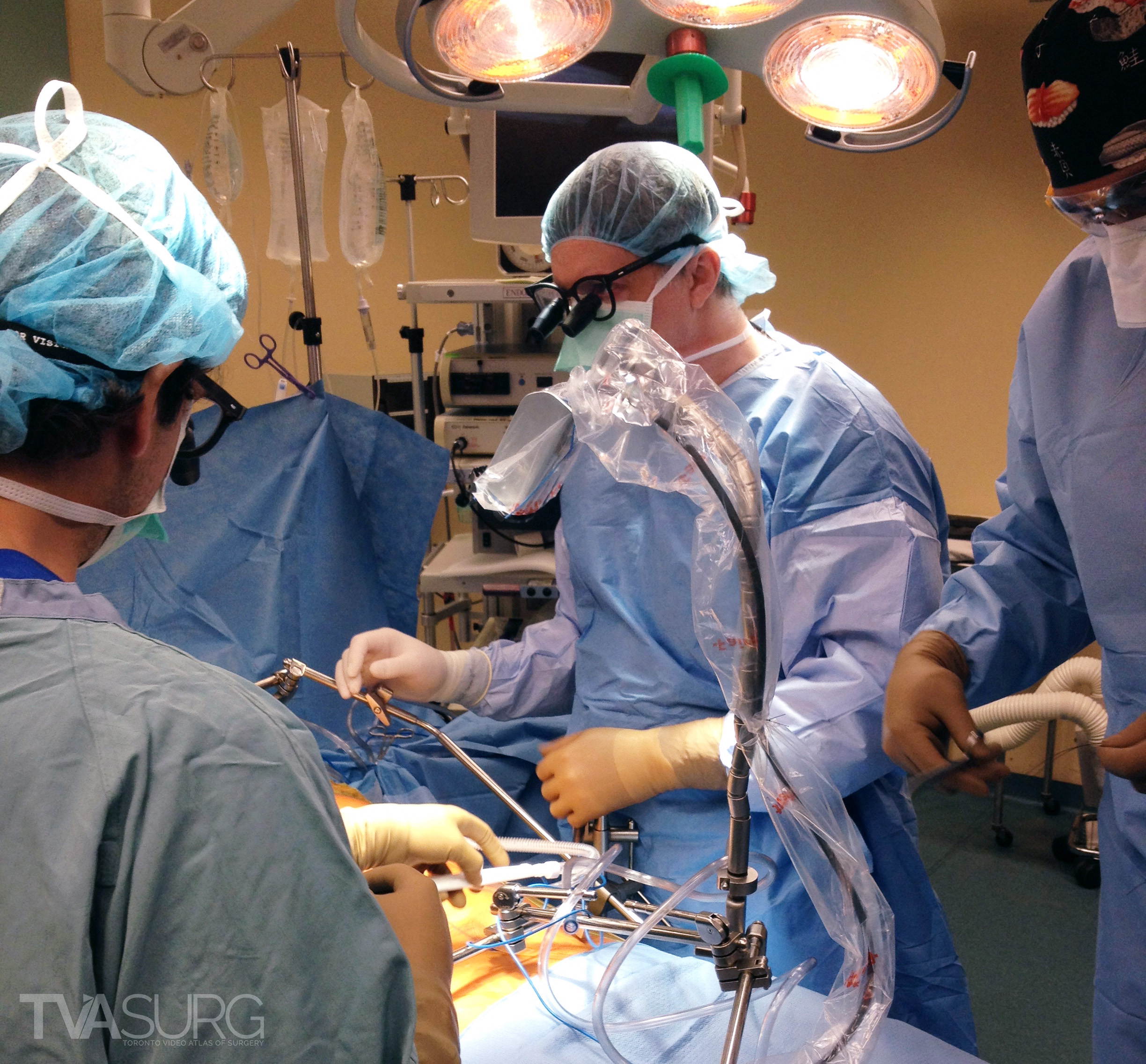 Dr. Ian McGilvray, one of our founding Atlas Editors, has extensive experience in filming open surgeries and developed many of the protocols for TVASurg OR filming.

The benefits of live video recording in the OR include the ability to send the video feed of the operative feed to monitors throughout the OR so that all members of the surgical team can see what’s happening and follow along with the procedure, improving communication between staff during the case. OR nurses are better able to anticipate when specific tools are needed by having a clear view of what the surgeons are doing. Medical students and residents can observe an unobstructed view without needing to scrub in and crowd the operative field. The benefit of archiving footage for later review and education is well known and widely appreciated.

Preparation for filming can occur anywhere from weeks to hours before a case, depending on the logistics and rarity of the procedure. Typically the surgeon in charge of the case will contact the TVASurg production team of a filming opportunity, but it is sometimes the team that seeks out cases. Either way, prior to filming the production team will always reach out to the OR nurse coordinator and/or OR nursing staff at the institution where filming is to take place to clear permissions and begin logistic discussion. Patient consent will always be obtained prior to any and all filming.

The surgeon will draft an OR script and circulate it to the TVASurg production team and surgical support staff. Check out last month’s blog to learn more about our surgical script development. Once arrangements are made, we’ll arrive early on the day of filming and get ready to set up. 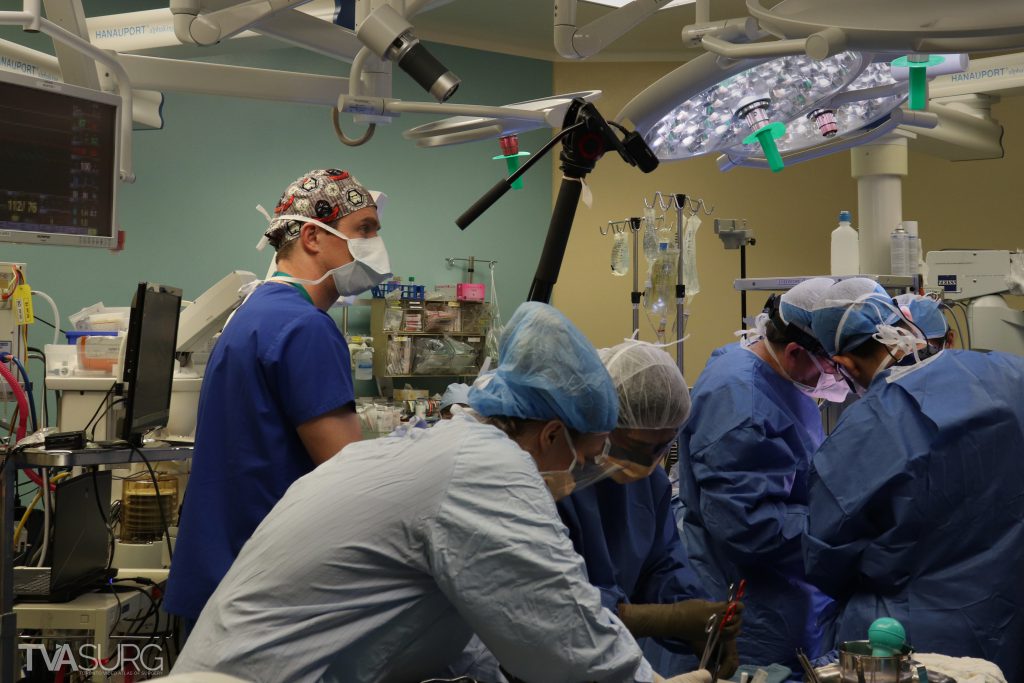 Overhead surgical cameras, head mounted cameras, tripods and monopods, even hand held cameras can all be utilized for obtaining footage in the OR, it just depends on the situation and constraints specific to each case.

Current systems for filming open surgery utilize a variety of methods such as head mounted cameras, surgical light mounted cameras, and portable filming setups. At TVASurg we seek to utilize whatever methods will give us the best result for the given assignment, and different types of procedures call for different methodologies.

Whenever you discuss filming surgery with someone, frequently the first idea that comes up is head mounted cameras, such as a GoPro. Head-mounted cameras allow the surgeon to capture their own point of view, and for tight spaces and small surgical exposures, this can sometimes be the only way to get footage of the operative field. Unfortunately, head-mounted cameras frequently produce shaky and thus nauseating footage. Even if you do take the time-consuming approach of motion-tracking the footage to correct for the camera shake, you will still have motion blur as a result, and this makes the footage less than optimal. So, while head-mounted cameras can contribute unique shots to a final video, they are almost never the sole solution to OR filming.

One method of removing camera shake while maintaining flexibility in camera position is by using camera stabilizers such as gimbals, or gimbal camera systems like DJI Osmo cameras. Gimbals allow you to move a camera in smooth continuous motions without unpleasant and distracting, jittery movements. The Osmo Pro camera we sometimes use is controlled with a smartphone through an app. These unique cameras offer an increased range of flexibility, are the best option for capturing transitions from one operative location to another, and the newest models offer high quality 4K formats.

Sometimes it’s not the camera itself but augmentation that makes all the difference. A unique tool utilized in photography and videography is the monopod, which is a single long pole a camera unit can be fixed to. A monopod can allow for a videographer to capture difficult angles, but requires a person to hold it at all times, and does not completely eliminate subtle camera movements. In surgeries where the operative field changes, such as in ENT free flap reconstructions, a monopod can be useful in an OR environment where the angles of view are rapidly shifting.

For the best possible results in filming surgery, you want at least one fixed-position camera. The traditional camera tripod is a straightforward method to achieve this, but in the majority of OR environments, the vertically fixed placement of the camera above a stationary support limits the camera’s point of view. In open HPB surgeries, the recommended approach is to use a laparoscopic HD camera mounted on a mechanical arm fixed to the OR bed, as described in a 2013 AHPBA presentation, and in a 2007 paper in the journal Annals of Surgery. For our filming setup, we have one camera thatʼs secured to the surgical bed, which is draped in a sterile cover, and an overhead camera that is attached to overhead equipment, also draped with a sterile cover. We published a comprehensive description of our filming methodology in a 2016 paper in the Journal of Visual Communication in Medicine. 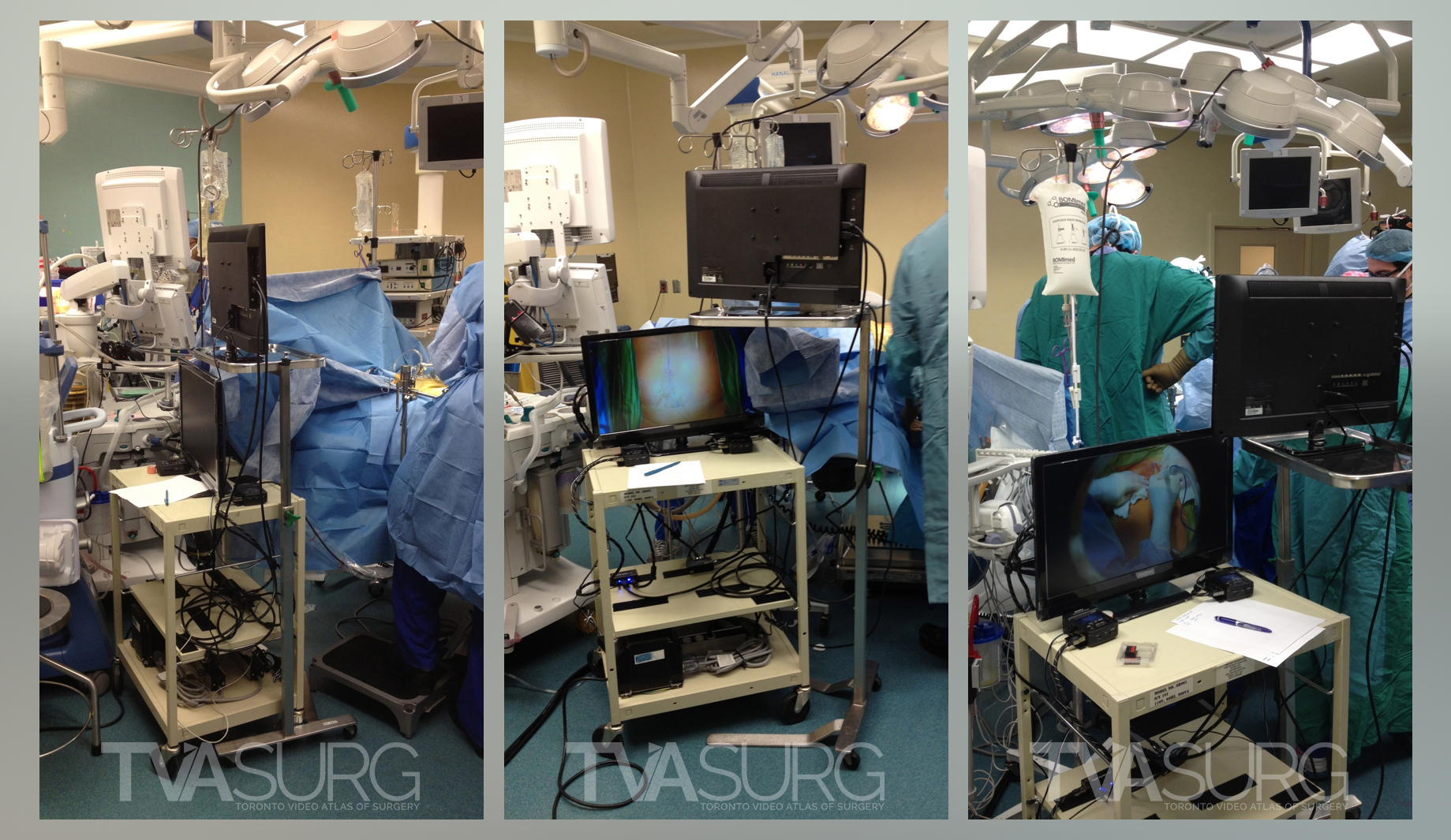 Seen here is our filming cart alongside the OR bed. The cameras are fed to two TV screens, or, to the OR video feed so the camera’s view can be seen on a selected OR monitor.

A specially constructed, and medical engineering certified, “filming cart” is the focal hub for our presence in the OR. This allows us to not only have two power strips providing power supplies to our cameras, monitors, laptop and other components, but also gives us the flexibility to route our video signals to both the OR room monitors, and a television screen of our own. We now feed our video signals from our cameras to a gaming laptop and using OBS video streaming software, can rapidly switch signal feeds without lag.

In the filming process, we are the ʻeyesʼ, and the surgeons or nurses are the ʻhandsʼ. During surgery, only the surgeons can touch the cameras, so at times, when they are not deeply engrossed in demanding steps of the procedure, we may ask them to adjust the cameras, and the live feed monitors greatly help them to get instant feedback on the camera’s point of view. With the OR script on hand, we might anticipate that an important step is approaching, so if the camera is not aiming where weʼd like it to be, and weʼd ask the surgeons to move the camera for us.

During the procedure the camera may also be obstructed by the surgeonsʼ hands - we would simply inform them the camera is blocked. In some cases, they are able to give us a clearer shot by moving their hands back a bit, or shifting their weight so that their head is no longer in the way. Sometimes though, they are working on a step that requires intense concentration and/or they must lean in to get a better view, in which case, we’d simply wait for them to complete that step and ask for a “demo shot” after they’re done. 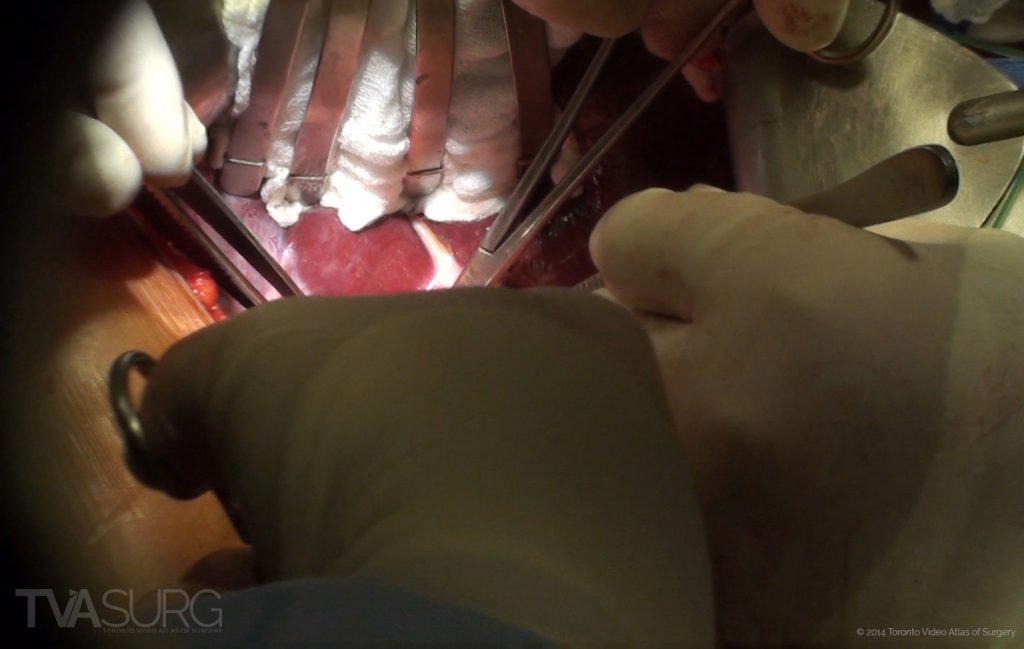 The surgical field may be blocked by hands and heads during filming.

When appropriate to do so, we'll ask the surgeons to clear the line of sight for us.

The use of “demo shots” may seem contrived or ingenuine, but in fact they are the most effective way to capture moments in a procedure for teaching purposes. At times when the surgeons have finished clearing away connective tissue and identified certain key anatomical structures, we would ask them for a demonstration shot. The surgeons will pause and check the visibility of the camera, then slowly and methodically point out the individual structures for us, vocalizing them as they go and may even mention their relevance to the procedure. This is commonly done when residents or new fellows are present in the surgical field, and helps orient all surgical personnel to the current stage of the procedure.

So as you can see, there is a very tight collaboration process going on during the filming process, where we continually monitor the camera and follow along with the OR script, and the surgeons or nurses would try to help us get the best shot possible. We advise them if the camera is blocked, or if weʼd like a demonstration on the steps theyʼve performed.

We have found that the more communication there is between us, the better the footage. Weʼve learned to speak up and give them instructions, and they understand their cooperation makes a huge difference in footage quality. We hope you've enjoyed this overview of our surgical filming methods, and we hope that you'll comment and share your experiences with OR filming. Did we miss anything? Let us know!